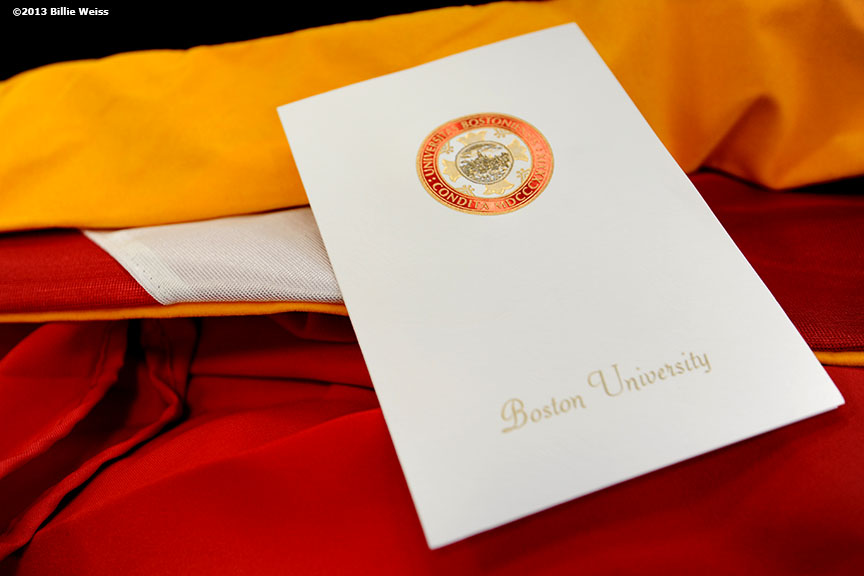 “An invitation to the 140th Commencement at Boston University is displayed Friday, May 17, 2013 in Boston, Massachusetts.”

After living in Baltimore my entire life, I moved to Boston last March with two goals: to work for the Red Sox and to go to graduate school. Today, I graduated from Boston University with a Master of Science in Journalism, and it feels pretty darn good. I think I’m done with school for a long, long time.

What a year to be a photojournalist in Boston. It’s been a crazy, roller coaster ten month ride, and from what I gather in conversations with professors within the College of Communication, one unlike any other.

Just thinking about the stories we covered makes my head spin. In the Fall, we were thrown right into the middle of a presidential election, and within days of our first class we’re shooting Obama campaign events, documenting rallies, and covering election night from inside the Mitt Romney headquarters. In the Winter, we’re knee deep in snow, out covering winter storm Nemo. In the Spring, we’re shooting and reporting in the middle of an attack on the Boston Marathon. Between it all, we’re telling the smaller stories: The kite flying fisherman, the one man band, the piano maker, the early morning runners in Boston Common, and the Head of the Charles race to name a few.

In November, our graduate photojournalism class of five students became a class of four, as we lost one of our peers and friends, Chris Weigl. I wish he were here for this day.

It’s hard to make sense of all of that, and I still don’t know if it’s all sunk in yet. What I do know, though, is that given all that’s happened, we’re more prepared to do journalism the right way than anyone else out there. We can cover any kind of story under any circumstances. I’m optimistic about where journalism is now and where it’s going.

Personally, I had a great year, although it was ridiculously busy and, at times, stressful. Trying to balance the work of a full-time student with a job that requires long, odd hours was tough, and I found it difficult to devote equal energy and effort to both school and work. I won’t miss running back and forth between Fenway Park and the COM building through that disgusting Beacon Street parking lot two or three times a day.

What will last, though, are the friends made and the connections solidified. I come out of this program with a new set of skills related to multimedia journalism, but more importantly, with a new network of friends and colleagues. In our world, nothing is more important.

As for my plans from here on, I’m going to continue shooting for the Sox, and continue freelancing on the pro tennis tour and around Boston. We’ll see what life brings.

A huge thank you to the family, friends, professors, and mentors who helped me through this year! I’m a lucky guy. Congratulations to the Class of 2013.